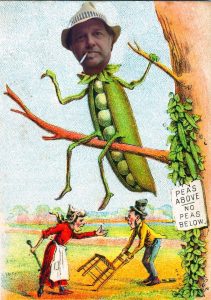 To avoid doing one-hundred episodes, Faux sells Hypercube Labs and begins clearing the inventory and then going out to Airport Chili’s.

Time for the Show 1×51: This Episode Hurt Us More Than It Hurt You

TIME FOR THE SHOW is back for a second year, thanks only to the tireless labor of the children in the Hypercube sweatshops, whose names will quickly be forgotten by history, but whose deeds will continue to earn us “likes” on Farcebook. The hosts planned a meeting before this episode to talk about what to do with the show in the new year, but it wouldn’t be an episode of TIME FOR THE SHOW if we didn’t spend the show talking about what to do on the show, so it was decided to save said meeting for the show, which turned out, as usual, to be potentially, but not actually, a good idea. All of the above plus Blind Eyes, Viewer Mail, Is It a Band, and Peas’s Apologies in this, the premiere episode of 2019 of TIME FOR THE SHOW!

Tensions are high as the quarantine-fields lower over Hypercube for the first night. Feeling the tension, Doktor Faux is isolated in the studio and peas is nowhere to be heard from. Doktor Cosmac jumps in to aid Faux from the HyperCOMM and Trenchie has a few songs for the show. Rev Negative and havedumbluck arrive in time to demolish the intellectual process in proving grounds and Scalpod hosts Is It a Band?